The 18th March was now upon us.  It was such a big thing to us but this was the one time when everyone around us did not get it.  We had to know the truth, we needed to have an understanding of what happened and make some sense of the pain.  I was hurt because nobody seemed to be taking an interest, they seemed to just think that she had passed away and that was the end of it and we had to move on with our lives.  In hindsight, I think nobody knew how to deal with the situation and we may have been slightly unfair. 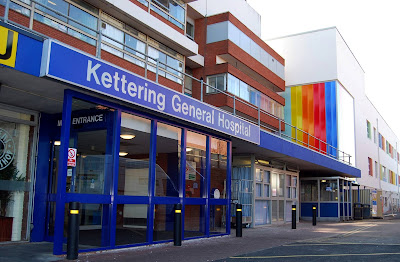 I was nervous, Amanda was nervous.  We didn’t sleep well the night before and managed to get the children off to school without any real drama and set off towards Kettering General Hospital.  I took her to the Morrison’s café nearby as much to make sure we had eaten as there was a real possibility that we might not want to later.  In the lead up to the day I was winding myself up about getting one chance to get the answers.  It never sat right with us that the results meeting was not until over two months after her death.  Why did it need to take so long?  The cynic inside of us was thinking that the hospital would be ready for any eventuality or accusation that we could throw at them.  I remain sceptical to this day about when the pathology results from the placenta were readily available to the hospital.  That said I don’t think we were remotely prepared for what was about to occur over the next 60 seconds or so.
We were told via the letter we received a few weeks previous inviting us to the inquest that we should report to the reception in the main maternity wing.  This didn’t seem unreasonable to me but it did cross my mind that it would be very difficult for Amanda to walk into the same room where we had excitedly been before awaiting scans.  We were told to sit over in the waiting area amongst all the other pregnant couples.  I questioned that on the basis that we were there to discuss the events that led to our daughter passing away and was told that the waiting area was the only place we could sit but the consultants would be ready for us in only a minute or two.  Given that it was for a very short time, I didn’t want to make a scene and make Amanda anymore stressed so I accepted it.
We had been told that we would have the opportunity to meet with the Head Gynaecology Consultant who had overall responsibility for Amanda’s labour, this was a lady called Mrs Nishtar.  20 minutes passed, Amanda was sitting amongst happily pregnant women getting more agitated as the minutes went by.  Already, it felt like it was not going well, it felt cruel, surely she should not have been subjected to that.  I kept telling myself that any moment now we will be sitting in a nice comfortable chair, around a table with coffee and biscuits whilst we learnt the results of the placenta being tested.   That I think is what I had blindly assumed would happen or at least that what would happen if I oversaw proceedings.  A lady eventually came to us and told us to go with her along the corridor.  We were taken into an assessment room, the very one where we had been in only a few weeks before and was told that Mrs Nishtar was delayed and would be for some time so her assistant would take us through the findings.  This did seem a bit disrespectful but we were calm enough to realise that she might be dealing with an emergency so I said that I would rather reconvene later in the day or even a few days later.  This I was told was not possible due to Mrs Nishtar's incredibly busy schedule.  We were made to sit on an assessment bench and the assistant introduced herself before opening a folder containing a lot of paperwork she fumbled around and eventually found what she was looking for.  It was so clear that she was barely aware of the situation, did not know the name of the deceased baby or the date of her labour without referring to the documents.  This got me riled, here we were sitting on a bench in a cold, bare room finding out the details of what led to our daughters’ death and Amanda being so close to losing her life and the person explaining it to us had no knowledge of the facts.
She confirmed our daughter passed away through something called “Chorioamnionitis”.  I thought, OK that is a start, a big medical word that no doubt can be explained in common English.  I asked whether Group B Strep has any relationship with Chorioamnionitis and the consultant said that "it did not in any way".  In one way, we were relieved because at least that meant that our daughter did not die because of a £11 test that was not provided by the NHS to her mother.  But in another way what on earth was it – the consultant, who unfortunately did not speak very good English did try to inform us what Chorioamnionitis is and how it develops but the overriding conclusion was that she was reading word-for-word from the folder and she didn’t have the knowledge.
The assistant went on to confirm that Amanda became very ill through sepsis as a result of the Chorioamnionitis.  It seemed like that was not even part of the agenda of the meeting as though it was an everyday occurrence that was hardly worth talking about.  Clearly this blog is generally about Mia and Group B Strep but one thing I will not allow to happen is for Amanda catching septicaemia and being very close to her own death to be forgotten.

One thing that stood out very clearly was that nobody was going to offer us an apology for what happened.

We left the meeting totally deflated, what was supposed to be the day we got answers felt like we had been fobbed off.  Obviously, when we got back to Desborough we researched what Chorioamnionitis is, the causes and just could not believe what we found after just 30 seconds of using a search engine.  Many medical sites quite clearly stating that Chorioamnionitis is often caused by an untreated Group B Strep infection.
I was raging and phoned the Hospital insisting on another meeting, this time with Mrs Nishtar.  That initial request was denied by her PA.

Last week, in the House of Commons, MP Sharon Hodgson broke down as she revealed her agony of being told her stillborn daughter, Lucy, who was born 20 years ago at 23 weeks + 5 days did not ‘officially exist’.That is because under UK law, parents are not given a birth or death certificate if the child is not born alive before 24 weeks’ gestation.
Although the passing of her daughter was not as far as I’m aware related to a Group B Strep infection, listening to her plea hit home with us and got us thinking about what she is asking for.Her little girls heart had beat through most of her labour and she held her babies motionless body in her arms in hospital.
It surely cannot be questioned that indelible memory is fact that her daughter indeed existed. MP Sharon Hodgson, 02/02/18 Our daughter, Mia was born alive at 25+5 weeks (2 weeks older than Lucy) and lived for 22 minutes, therefore she ticked all the boxes to be classed as having ‘officially existed’ therefore her birth and death would…
Post a comment
Read more

Bereavement Leave
A recent social media discussion has got me thinking about the difficulty in returning to work following the loss of your child.For some it be can an unbearable experience that literally pushes many over the edge.I was one of the lucky ones, I for many years have enjoyed an excellent working relationship with both my bosses and my direct reports in the same employment.Bereavement leave, especially time taken for the death of your child is, I guess, not something that enters your mindset through everyday life.That said, it never entered my head that within reason, I would not get given whatever fully-paid time I required to ensure that I was in the best possible place before contemplating returning to work.Some people and way more than I realised until participating in that  recent twitter discussion do not have the luxury of understanding bosses and colleagues that I had when I returned to work 2 and half weeks later following the passing of our daughter.
Of course, ch…
Post a comment
Read more