This is Amanda and Jason’s and their daughter Mia’s story told by Jason, a set of events that led to unbearable heartache, shattered dreams, self-doubt, depression, disbelief, a bond of togetherness, determination, pride and a lifetime goal….

We are just two ordinary people who met in their mid to late 30s’ living in the small, quiet Northamptonshire town of Desborough, originally caught up in the mess of acrimonious marriage breakdowns, primarily caused through effects of the recession of the past decade and the need to be happy and feel loved again.  We knew that we could be happy again, given the chance of rebuilding our shattered lives together and providing a loving stable environment for our children from earlier relationships.  I knew that circumstance meant that we would probably never have a large house or executive cars but Amanda wasn’t interested in that side of things in the slightest – I had also learnt the hard way that those things do not bring you happiness. 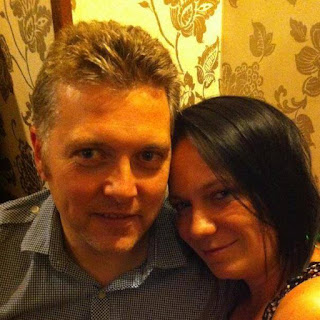 Amanda fell pregnant a year or so after we met, it took a while to sink in, get our heads around the news but it became clear to our families and those around us that we were happy, life it seemed, was about to restart.  The early stages of pregnancy were happy and uneventful, then during December 2012 disaster struck – at a routine scan at Kettering General Hospital, the baby was confirmed as being attached to the fallopian tube, it was unusually still growing – it was a rare and highly dangerous scenario of an ectopic pregnancy, a 16,000/1 chance and as the surgeons at our local hospitals were not qualified to operate, Amanda was admitted to a specialist hospital in North London around 80 miles away – the baby had no chance of survival and required immediate removal otherwise the outcome on Amanda’s health could be fatal.  It is one of the really poignant moments of our lives where we were looking at the heartbeat on a monitor of our little tiny baby that we were going to have to allow to be taken away, we had absolutely no alternative, it was a really, really horrible, heart-breaking experience.  In the grand scheme of things it was irrelevant but it was also my 39th birthday.  Trying to look back at things objectively, Amanda’s life had been saved, she could still become pregnant and our children were not aware of anything.  We did however realise that we will always think of that ‘little bean’ as we referred to him or her and wonder what might have been.
The traumatic events of London that winter did however paint the picture of our dream future.  We knew we loved each other, knew that we had the best interests of each other’s children at heart, although at that period of time we had perhaps lost belief in marriage.  The loss of our ‘little bean’ reiterated to us both how much we wanted to be ‘new’ parents again and the child would be ours.  We knew that time was not on our side, I was approaching 40 and Amanda in her mid-thirties.  We discussed the possibility of a new baby with our children and in principle they all thought it was a good idea!
We suspected that it wouldn’t be easy, did everything possible such as cutting down on the drinking of alcohol, going to the gym, eating properly, you name it we did it….  Perhaps somewhat obsessed, we did achieve our goal by the summer of 2013, Amanda was confirmed as being pregnant… we were both ecstatic – we were so careful given the events of London, after confirmation that everything was fine at the first scan, the children and wider family and close friends were told – we and the children were over the moon!  We had done it!!

Bereavement Leave
A recent social media discussion has got me thinking about the difficulty in returning to work following the loss of your child.For some it be can an unbearable experience that literally pushes many over the edge.I was one of the lucky ones, I for many years have enjoyed an excellent working relationship with both my bosses and my direct reports in the same employment.Bereavement leave, especially time taken for the death of your child is, I guess, not something that enters your mindset through everyday life.That said, it never entered my head that within reason, I would not get given whatever fully-paid time I required to ensure that I was in the best possible place before contemplating returning to work.Some people and way more than I realised until participating in that  recent twitter discussion do not have the luxury of understanding bosses and colleagues that I had when I returned to work 2 and half weeks later following the passing of our daughter.
Of course, ch…
Post a Comment
Read more

Last week, in the House of Commons, MP Sharon Hodgson broke down as she revealed her agony of being told her stillborn daughter, Lucy, who was born 20 years ago at 23 weeks + 5 days did not ‘officially exist’.That is because under UK law, parents are not given a birth or death certificate if the child is not born alive before 24 weeks’ gestation.
Although the passing of her daughter was not as far as I’m aware related to a Group B Strep infection, listening to her plea hit home with us and got us thinking about what she is asking for.Her little girls heart had beat through most of her labour and she held her babies motionless body in her arms in hospital.
It surely cannot be questioned that indelible memory is fact that her daughter indeed existed. MP Sharon Hodgson, 02/02/18 Our daughter, Mia was born alive at 25+5 weeks (2 weeks older than Lucy) and lived for 22 minutes, therefore she ticked all the boxes to be classed as having ‘officially existed’ therefore her birth and death would…
Post a Comment
Read more